‘The Most Important Living Being on the Planet’

The relation between bees and flowering plants is one of the most extensive, harmonious, and interdependent cooperation on the planet. It is a relationship begun over 150 million years ago that has led to the procreation of a rich diversity of species and promoted the elevation of the human species on earth. 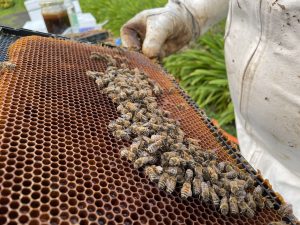 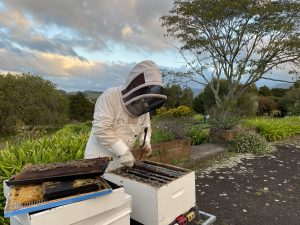 At St Enoch and St Elijah Monastery (SEASEM), we recognise the value of bees in pollinating our gardens and fruit trees, and for the environment in general. The monastery keeps registered hives on the property, and the monastic community enjoys active participation in beekeeping life.

Our bees also produce the most delicious Manuka and Kanuka honey from the various flowering trees scattered around the monastery grounds. While we don’t sell our honey, it does contribute to our wellbeing in daily doses of honey and citrus. And we do use the honey for dipping our homemade candles in, which we do sell in the shop and online. Like all of God’s creatures on the 50 acres of SEASEM, our bees are very dear to us, and we take great interest in their comfort and activities. Learning about bees and how to be a responsible and successful beekeeper is best done with a group of experienced people who can share their knowledge and practical advice for safe (for you and the bees), and enjoyable apiculture.

To this end, SEASEM beekeeping happens under the covering of the Ngahere Bee Club, which had its origins in the heartland of honeybees in New Zealand, the Hokianga. The club was originally established by trainer, John Morunga. Today, all members participate in mentoring each other and sharing their expertise and beekeeping experience. The Ngahere Bee Club stands for the protection and enhancement of native flora and fauna by promoting and fostering hobby/amateur/non-commercial beekeeping in Northland, New Zealand. Me

Prior Rob is the current Chair of the Ngahere Bee Club and enjoys helping the club to progress its aims and fellowship. An important aim is the control of varoa and American Foulbrood which kill bees. A number of the Ngahere Bee Club members, including the Prior, have successfully taken the examinations of the AFB Recognition Course, with a view towards applying for a Disease Elimination Conformity Agreement (DECA), which allows the inspection of other beekeeper hives. 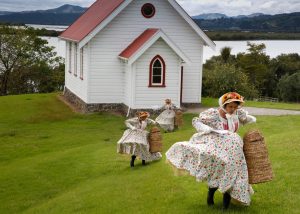 Club members gather to create, share and inspire each other in the passion for beekeeping. A variety of beekeeping related activities take place in the meetings, including visiting each other’s hives, making hives, learning and sharing information about hive protection, feeding, diseases, seasonal changes and best practice. The club is also active in the community and encourages new members. Library talks are given, and the club held a wonderful event to mark the 180 year anniversary of Mary Bumby bringing the first honeybee hives to New Zealand. This involved a very talented re-enactment of the period as well as stalls of honey and fresh produce, and beekeeping information.  If you would like to visit a meeting or become a member of the Ngahere Bee Club or , see the Facebook Page here. 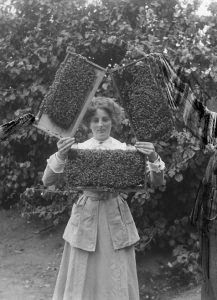 History of beekeeping in New Zealand

Honey bees have been kept in New Zealand for more than 150 years. In that time, beekeeping has moved from being a home craft or lifestyle choice, into a progressive industry. New Zealand is now recognised as one of the world’s most advanced beekeeping countries and is a leader in several important fields.

Mary Bumby, the sister of a Methodist missionary, is considered the first person to introduce honey bees to New Zealand. She brought two hives ashore when she landed at the Mangungu Mission Station at Hokianga in March 1839.

While New Zealand already had native species of bees, they were not suitable for producing honey, their role was as pollinators. More bee species were brought to New Zealand in 1843. In 1848, William Cotton wrote a manual for New Zealand beekeepers, describing the basics of bee husbandry and production of honey.

The New Zealand bush proved a hospitable place for bees, and the number of wild colonies, through swarming, multiplied rapidly, especially in the Bay of Islands. Isaac Hopkins, regarded as the father of beekeeping in New Zealand, observed that by the 1860s, bee nests in the bush were plentiful, and considerable quantities of honey were being sold by Māori – the country’s first commercial beekeepers.

The commercial production of honey in New Zealand began during the late 1870s, following the introduction of the Langstroth hive, the boxed-framed beehive model still used today.

If you want to know more about bees, see Apiculture New Zealand for fun facts and more…